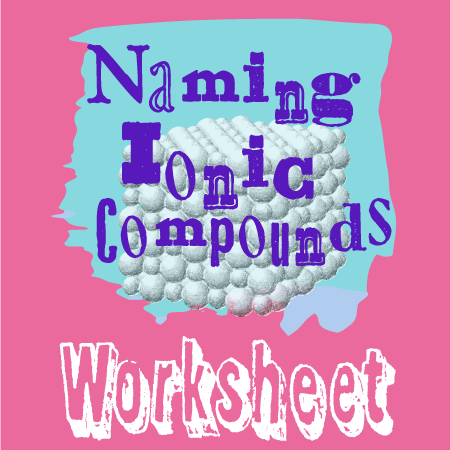 About the Naming Ionic Compounds Worksheet

Use this naming ionic compounds worksheet (answers provided) to quickly learn important chemical names and formulas. There are 4 exercises to practice, plus complete instructions, in the 5 page packet.

We’ll start from the very beginning, as these chemical names and formulas are a great way to start learning chemistry. Or, you can use the packet to quickly review naming ionic compounds. You’ll learn the patterns easily, the names and formulas will become obvious, and you’ll save tons of time with chemistry class once you know this system.

Download and print the black and white pdf. It’s 5 printer-friendly pages. There’s an answer key too in the other pdf file. Click here for complete instructions in video format. 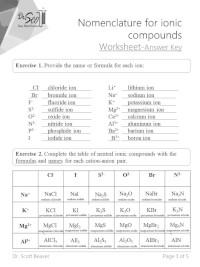 We suggest the above pdf version of the worksheet looks best printed out. If you’re reading on the web, the below version might look better on your screen. It’s the same thing, just a text version below as opposed to the pdf above.

Rather see it and hear it? Click here for complete instructions in video format.

Nomenclature is a system of naming.

This worksheet presents a widely used system of nomenclature for ionic compounds. There are two types of metal cations with different naming conventions discussed
separately.

Cations with a single, fixed charge

Cations have a positive charge. They are formed from metals, which lie on the left side of the periodic table. The main group (Groups 1-8) metals form cations with a single, fixed charge. The charge is the same as the Group (column) number on the periodic table. The cation name is formed by adding the word “ion” after the element name. For example, the element sodium (Na) is found in Group 1. It ionizes to form the “sodium ion” represented as Na+. The charge is +1 because it is in Group 1.

Anions have a negative charge. They are formed from nonmetals, which lie on the right side of the periodic table. The negative charge is found using the Octet Rule as eight (8) minus the Group number. Anions always have a single, fixed charge. The anion name is formed by changing the element name suffix to “-ide” and adding the word “ion” after the element name. For example, the element chlorine (Cl) is found in Group 7. It ionizes to form the “chloride ion” represented as Cl–. The charge is -1 because it is in Group 7, and 8 – 7 = 1.

Ionic compounds are formed by cation-anion pairs in electrically neutral ratios. Ionic compounds are held together by ionic bonds. They are named using the cation name first, followed by the anion name, excluding the word “ion.” For example, sodium ion (Na+) and chloride ion (Cl–) form the compound sodium chloride. Its formula is NaCl, which is electrically neutral because sodium ion is +1 and chloride ion is -1. As a second example, magnesium chloride has the formula MgCl2. The subscripts indicate 2 chloride ions (Cl–) per 1 magnesium ion (Mg2+). The subscript “1” is always implied and never written.

Note that NaCl2 does not make any sense, and therefore does not exist. The correct salt formulas NaCl and MgCl2 are based on the charges, as shown in the previous paragraph.

Note: There is never any charge indicated in the name of a compound having a cation with a single, fixed charge. The single, fixed charge is obvious to a chemist. For example, sodium chloride (made from Na+ and Cl–)  would always be NaCl. It could never be another formula such as NaCl2, which simply does not make any sense,

Provide the name or formula for each ion:

Complete the table of neutral ionic compounds with the formulas and names for each cation-anion pair.

Cations with a variable/multiple charges

Some transition metals have multiple possible cation charges. A roman numeral (I, II, III, IV, V, …) must be used in the cation and ionic compound naming system to distinguish between the charges. For example, iron (Fe) can form the iron (II) ion and also the iron (III) ion, denoted Fe2+ and Fe3+, respectively. Iron (II) oxide and iron (III) oxide are distinct compounds, with electrically neutral formulas FeO  and Fe2O3, respectively.

Provide the formula for each compound.

The first step in naming an ionic compound is to determine whether or not the cation can exhibit multiple charges. This requires memorization. Learn the following procedure.

Provide the name for each compound.

Now that you understand simple ionic compounds, you are ready to learn about polyatomic ions using the Polyatomic Ions List and Worksheet.