The N2 Lewis structure has a triple bond between two nitrogen atoms. According to the octet rule, nitrogen atoms need to bond three times.

The N2 molecule is diatomic, meaning that two atoms of the same element are connected in a pair.

It’s easiest to think in terms of dots to make the N2 Lewis structure.

Nitrogen needs to bond three times, shown as the lone dots on the left, right and bottom of the N atoms in the below diagram. There is also a pair of dots, representing two more electrons, that won’t bond, on top of each N.

Think of connecting the lone dots to form bonds between each N atom. Each N atom needs to bond three times. So the pair of N atoms form three bonds with each other. 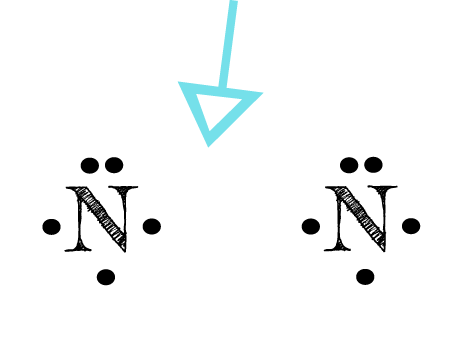 The two letter N’s in the N2 Lewis structure represent the nuclei (centers) of the nitrogen atoms. The nuclei contain the protons and neutrons, which are the solid parts of the molecule. Interestingly, the dots and lines represent electrons, which are not solid. The diagram is drastically out of scale, as the relative size of the nucleus compared to the surrounding electrons is usually comparable to a pea in a stadium. 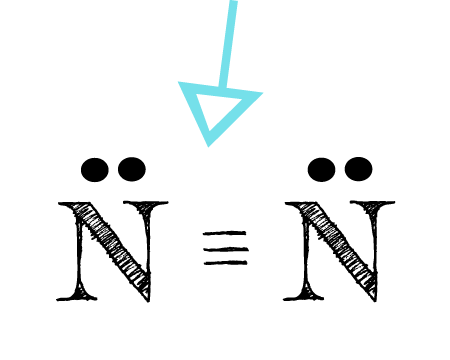 The N2 Lewis structure shows two nitrogen atoms bonded in the same way to each other. It’s perfectly symmetric.

Small nonpolar substances tend to be gasses. They tend to have low boiling points.  For example, N2 must be chilled to about -200 ℃ or -320 ℉ to liquify it. The Earth does not get this cold, and the atmosphere stays filled with N2 gas.